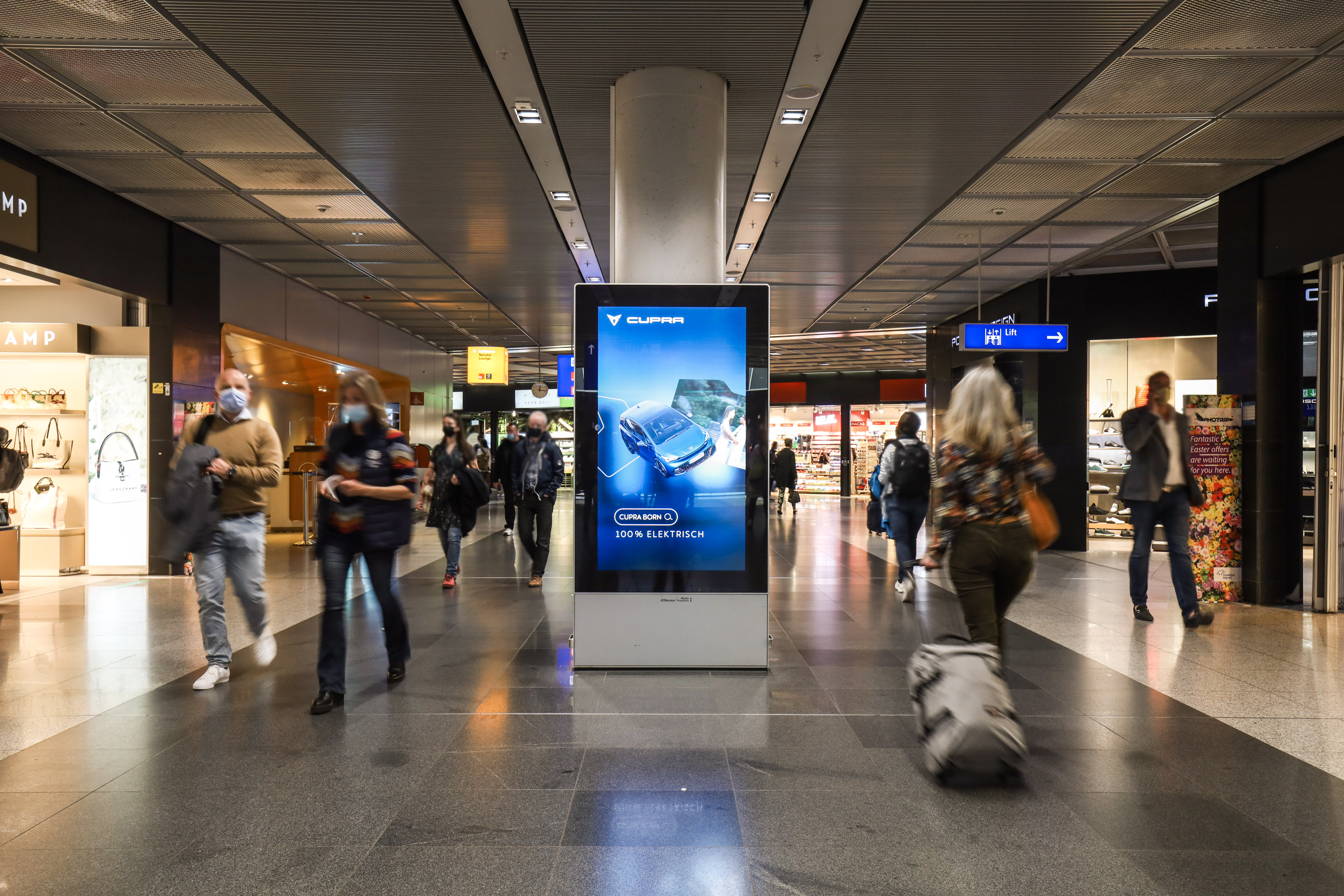 In a first-mover campaign, CUPRA presents its first fully electric model, the CUPRA Born, with a programmatic digital out of home (DOOH) campaign at Frankfurt Airport. An omnichannel campaign combines eye-catching digital advertising space with an impressive promotion point.

From mid-April, the focus of the multi-week pilot campaign is on the company’s first fully electric model, the CUPRA Born. The new campaign takes advantage of Media Frankfurt’s DOOH inventory, such as the Business network.

For the campaign, CUPRA has opted for an effective combination of specific targeting via programmatic advertising and an experiential promotion. Concurrently with the DOOH campaign, passengers can see the fully-electric CUPRA Born in the Atrium of the airport, via a digital platform capable of simulating a variety of surfaces, thus being able to engage with the brand in a live sensory and emotive interaction.

To ensure that the campaign reaches the target audience effectively, the marketing experts at Media Frankfurt developed a specific persona and tailored the media chosen programmatically around it in accordance with the time of day and day of the week: this persona is oriented towards quality and technology, is receptive to electro-mobility and has a certain degree of financial freedom. With the new programmatic offering by Media Frankfurt via the VIOOH platform, CUPRA can increase both net reach and average number of people at the airport – far more efficiently than would have been possible using conventional media techniques.

“CUPRA is still a young brand on the German automotive market. It is therefore particularly important for CUPRA to achieve visibility and awareness”, says Giuseppe Fiordispina, Marketing Director of SEAT and CUPRA Germany. “Cars such as the CUPRA Born can be displayed very effectively at busy locations such as Frankfurt Airport. The car is not only visible – in such a way that it attracts the attention of a specific target group – but also accessible so passengers can enjoy an immediate hands-on experience. Communication of this kind is not only innovative but also unrivalled.”

The programmatic DOOH campaign is scheduled to run for several weeks while the CUPRA promotion in the Atrium will continue to the end of the year.

Launched by Media Frankfurt and VIOOH in April, the DOOH offering means it is now possible to book digital inventory programmatically, a feature available at no other German airport. For clients, the use of VIOOH’s supply-side platform combined with the extensive OOH inventory of Germany’s leading airport-advertising agency makes possible highly effective, data-driven DOOH campaigns throughout the whole of Frankfurt Airport. The portfolio currently includes over 500 screens at busy locations, such as check-in halls, gate areas, security checks, access roads and baggage carousels. Per month, these screens can deliver up to 270 million viewed impressions.

“With SEAT’s first-mover project, we are able to demonstrate vividly the possibilities opened up by the new programmatic offering at Frankfurt Airport and achieve a precise target-group approach with a great impact for the brand”, explains Media Frankfurt Managing Director Martin Korosec. “The DOOH market is highly promising at present, especially in Germany where we are looking forward towards billings of around € 337 million for DOOH advertising in 2022.”

“The airport audience tends to be affluent and have a high dwell time, making this environment desirable from a programmatic perspective due to these highly sought after audience segments,” said Natalia Escribano, Chief Commercial Officer at VIOOH. “Combining Media Frankfurt’s leading airport inventory with VIOOH’s programmatic capabilities is an exciting development for the market that will enable advertisers to create highly targeted, flexible and measurable DOOH campaigns across Frankfurt Airport - allowing more brands to directly engage with this desirable audience,” added Escribano.

The upbeat outlook for the DOOH sector – especially with regard to the development of programmatic DOOH – is also confirmed by the ‘State of the Nation: Programmatic OOH report’, published annually by VIOOH. Based on a poll of German agency and advertising executives about their assessment of the programmatic DOOH market, the report shows that eight out of ten respondents (81 percent) plan to integrate more programmatic DOOH in their multi-channel campaigns. Moreover, 82 percent of the industry’s executives want to invest in more expertise in this field.

Other partners involved in this programmatic service include Active Agent as the DSP partner of VIOOH and Ben Hur GmbH. The Cologne-based media technology system house was responsible for the conversion to the new CMS walkby system, with the connection to the VIOOH platform. In a record time of 14 days, the entire digital inventory of several hundred screens was converted to the wbs system. “This smooth transition to a new content-management system in such a short time, including the programmatic integration, was only possible thanks to the efficient and professional working relationship between Media Frankfurt and VIOOH”, notes Ben Hur CEO Walter Jünkering.

VIOOH is a leading global digital out of home marketplace. Launched in 2018 and with headquarters in London, VIOOH’s platform connects buyers and sellers in a premium marketplace, making OOH easily accessible. Led by a team of digital OOH and programmatic tech experts, VIOOH is pioneering the transformation of the OOH sector, championing its role in enhancing omni-channel digital campaigns through the use of programmatic capabilities and data. VIOOH currently trades programmatically in 15 markets, with more to follow. For more information about VIOOH, please visit www.viooh.com or follow us on Twitter and LinkedIn.

Media Frankfurt GmbH is the exclusive marketer of advertising space at Frankfurt Airport. Founded in 1971, the Fraport subsidiary has developed into Germany's market leader and number one advertising platform in the aviation sector. Through the participation of JCDecaux - marketer of over 200 airports worldwide - Media Frankfurt is the innovation hub for Digital Out of Home. More than 1,500 advertising media inside and outside the terminals reach several million mainly international passengers every year at one of the three biggest hubs in Europe. Whether analogue, digital, POS and promotion or mobile - Media Frankfurt's omnichannel portfolio enables effective brand staging and cross-media, highly networked campaign management along the customer journey. Further information is available at www.media-frankfurt.de.